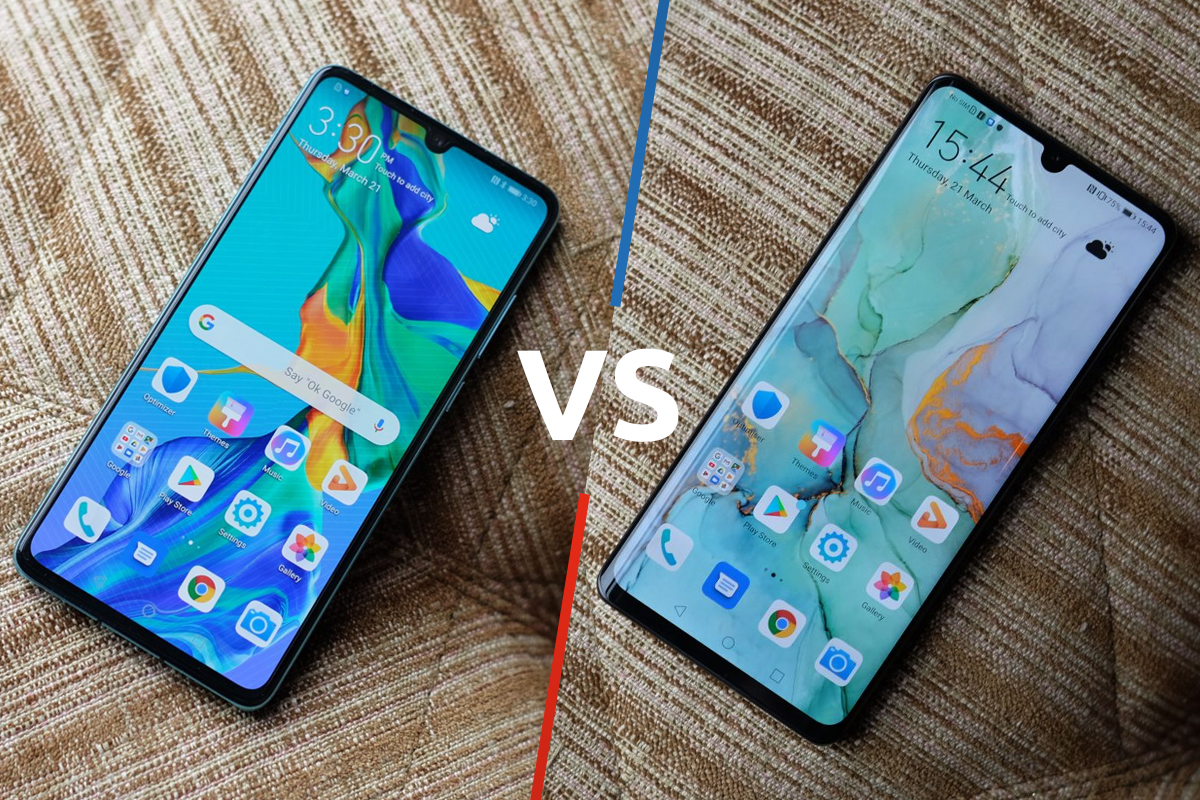 Huawei’s P30 series came out last year and replaced its P20 series. The company released three different variants of this phone including the P30, P30 Lite and P30 Pro. Although Huawei has launched the P40 series, these phones lack basic Google services. That’s why Huawei P30 phones are still getting more sales than their successor variants.

Now that we know why the P30 series is so popular, let’s talk about its most successful variants. We are going to review Huawei P30 and P30 Pro in this article. After reading this, you’ll know the major difference between their design, display, camera, specs and performance.

There is little to no difference in specs of Huawei’s P30 and P30 Pro. We have reviewed some major features to find the difference between these two smartphones.

There is too much similarity in terms of design between P30 and the P30 Pro. Both come in similar colours and feature metal frames that are sandwiched between glass panels. Both smartphones have an in-screen fingerprint scanner that is convenient to use and unlocks the phone in less than a second.

Both P30 and the P30 Pro have a triple rear camera on the back and dewdrop notch selfie camera on the front. The only difference that you get to see in the design is the 3.5mm audio jack.  Huawei P30 comes with a 3.5mm headphone jack while the P30 Pro lacks this. Instead, it allows the user to listen to music wirelessly or via a type-c USB connection.

Huawei’s P30 and P30 Pro comes with OLED panels with an aspect ratio of 19.5:9. In addition, both feature the same 2340 x 1080 screen resolution. However, there is a slight difference in screen sizes of these variants.

Huawei P30 features a 6.1-inch large display whereas the P30 Pro comes with a slightly larger 6.47-inch display. Moreover, the display of Huawei P30 Pro is curved, while the P30 has a flat display.

Also Read: How to Select best Phone for Yourself?

Just like Huawei P20 and P20 Pro, the P30 and P30 Pro mainly differ when it comes to the camera system. Huawei The P30 features a triple rear camera while the P30 Pro comes with a quad rear camera.

On the other hand, the P30 Pro delivers up to 50x digital zoom and 5x optical zoom. Its camera system consists of a 40MP main camera (f/1.6) along with an 8MP zoom sensor (f/2.4) and a 20MP ultra-wide sensor (f/2.2). in addition, there is an extra Time of Flight (ToF) sensor which uses infrared light for better image capturing.

Huawei has tried to make the P30 series resistant against the dust and water. However, the P30 Pro is slightly better than the standard P30 when it comes to waterproofing. The P30 Pro variant has an IP rating at IP68, which puts it with flagship phones. On the contrary, the standard P30 meanwhile, has a slightly lower water and dust resistance IP53.

Both the standard P30 and P30 Pro variants are equipped with the Kirin 980 chipset and offer the same 2.6GHz frequency. They run on the Android 9.0 Pie along with Huawei’s own Emotion UI 9.1. Moreover, both these smartphones come with a massive storage capacity of 128GB.

The main difference in terms of specs is the size of their RAMs. Huawei P30 comes with 6GB memory whereas the P30 Pro features an 8GB RAM.

On the whole, both the P30 and P30 Pro are incredible smartphones that you could get at a reasonable price. They offer the same user experience in terms of design, display and performance. In case you need a clear answer, Huawei P30 Pro is a superior smartphone. This superiority is based in the form of a larger display, battery capacity, more RAM and an advanced camera system.